. The First Book in the Outlander Series. 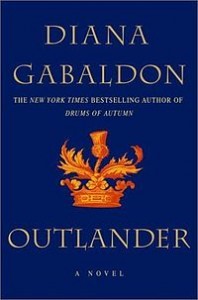 The first book in one of the best historical sagas written in our time, Outlander has a multi-genre appeal and is story-telling at its best.

In preparation for the Starz Series Outlander (see the trailer here) and the TV series’ first season, we wanted to post a review of the first book. Rumor has it the first season will cover Outlander (Book #1). (Actually I just wanted an excuse to reread the first Outlander).  At 22 years old, Outlander is still a treasure.  Re-reading it, I picked up more details and more depth to the story. The first time I read it I wanted so bad to know what happened next, that I raced through it.

Claire Randall is finally reunited with her husband following their separate roles during World War II. They are enjoying time together pursuing his passion of history and geneology, when she’s pushed into another time – a war-torn period 200 years prior. She falls into the hands of a Scottish clan, and meets young, gallant warrior, Jamie Fraser, who has troubled history. Told in first person, Claire is a strong lead character – and makes her share of mistakes. You truly feel she’s experiencing life of Scotland during the 1700s – and an adventure continues. It’s the epitome of story-telling – and easy to understand how the series is now on book #8 (Written in My Own Heart’s Blood).

To be fair, I love this book – but there are some differing opinions that I feel compelled to share. The complaints are often about the length of the book (it’s about three times the length of a typical novel) and the amount and descriptiveness of the sex (especially a certain controversial scene). Honestly, I can see their point – there are some interesting scenes that could be offensive.  But my response is this – it’s fiction.

A 5-star read, Outlander has multi-genre appeal. There’s elements of each: Historical fiction, mystery, romance, fantasy, science fiction. I’m not typically a fan of fantasy or time-travel, but Diana Gabaldon somehow escapes my usual criticism of that genre by not focusing on the scientific explanation of the time travel.  While it’s typically classified as historical romance, I would absolutely disagree and think this limits its reach. I hope the Starz series breaks past his stereotype. This is one of those books that is meant to be stocked in the bookshelf – and returned to from time to time. It’s a keeper.

Read it now, and get ready for the First Season of the Starz Outlander series:

Other Outlander/Books for Her links that you may enjoy: