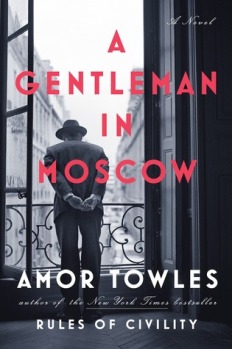 A Gentleman in Moscow is available now

Amor Towles does it again with prose, plot, and characters who grab hold and won’t let go.  Need a gift this Christmas?  This is it.

On house arrest in Moscow’s grand Metropol Hotel for being a Former Person in the new Soviet Union, Count Alexander Rostov once wrote a poem that inspired revolutionary fervor, and cannot, apparently, simply be shot at dawn. He is instead removed from his old suite of rooms and confined to the attic, where he builds a new life full of the kind of characters you can only hope to meet in your own. It’s a novel of fully-realized tragedy that somehow doesn’t get lost there, instead brimming with optimism and hope. With Rules of Civility, Towles had me for life– I looked up from the ending of that gem feeling as if it were impossible that I could be somewhere besides 1930s New York– and once again, Towles wins me over. Wonderful prose, characters, and plot, the holy trifecta for any writer, complete with literary, historic, and cinema references. With Amor Towles, know that you are reading something from someone infinitely more intelligent than you, but who writes so that you can still enjoy it, who makes you stop and think while still plunging forward to discover what happens next.

To quote the dust jacket: “He can’t leave. You won’t want to.”

Buy it now on Amazon