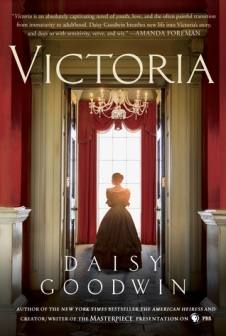 From the creator of the new PBS series of the same name, a novel of Queen Victoria’s ascension to the throne of England.

Based on Queen Victoria’s own diaries, Daisy Goodwin’s novel follows the young Victoria’s ascension to the throne, and her supposed relationship with her prime minister and private secretary, Lord Melbourne, who really shines as a character. Overall, I much preferred Goodwin’s first two novels, The American Heiress and   The Fortune Hunter in particular, which were as full as historical detail and feeling, but managed to surprise me. As a novel, Victoria is somewhat anticlimactic to a reader who knows the outcome, and likely outdone by the visual beauty of the new television series.

Victoria will be available on Amazon November 22nd